- October 30, 2019
Hacktoberfest 2019 is ending in 28 hours and 24 minutes as I am writing this and I am so happy to complete the challenge with 1 PR beyond expectation!

I will have my shirt soon!

I have done my final PR. Instead of solving an issue in a large project as I planned last week, I decided to put my effort into an ongoing issue in a project that I found on Day 1 of Hacktoberfest, the tmessage project.

The reason I want to take on this issue is that I have seen the issue sitting there for quite a while and no one seems to be working on it. I feel comfortable with the project since I worked on it before (releasee 0.2b) and want to contribute more to it. Besides that, I also want to dig into a problem that I have no clear idea of where to start in the first place which is a higher level for me.

The issue is a known problem in multi-threaded programs when the output is being displayed in 2 different threads. The usual solution is that you only allow 1 thread to handle output to the screen which is not technically possible here.

After doing some Google research, I went over an article about Cursor Movement in the terminal. It gives me an idea that I can use it to move the cursor to the beginning of the current input line and print the new message there. The problem now is that doing that will erase the message being typed from the screen which is still in the keyboard buffer. I must find a way to reprint those characters to a new line below the new incoming message, or in other words, to print the keyboard buffer to the screen.

I believe that there are tools out there that can help me with this but I did not manage to find one that suits my purpose. So, I went ahead and built my own input buffer.
My Input class mimics relatively the same functionality as the input() function of Python with one extra method allowing users to retrieve the current state of the buffer.

With that in mind, I changed the client code to use my Input object to get input from users and to print the buffer on a new line every time a new message is received.

And the result after the change is more than satisfactory.

The Story about the Pull Request

I was excited that I fixed an ongoing issue for the project so I immediately made my Pull Request. Guess what? I  wasn't done! There were reviewers immediately reported that my solution just... did not work at all.

I was surprised and shocked initially since, apparently according to the gif above, the problem seems to exist no more. I dived into diagnosing it intensively for days before I realized that their executable was of an older version of the code based on their screenshots I asked for as feedback. So... they simply had to rebuild the code, right? Wrong!

As they did that, they reported that I kind of only... fixed half of the problem. 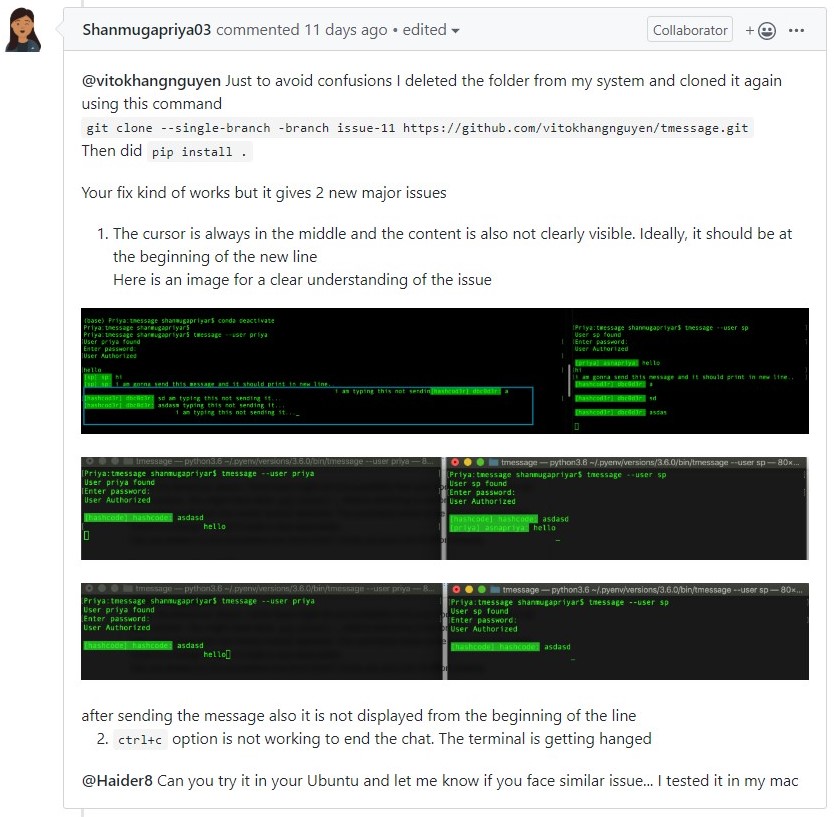 At this point, I realize that the problem is a platform-dependent issue as I can see that the 2 reviewers of my issue are using either Ubuntu or macOS while I am on Windows. I suspect the bug is at the difference between the "newline character" notations of Windows and Linux-liked systems so I made some changes to make sure the solution is cross-platform. This includes the handling of newline characters (\n) and carriage-return characters (\r). A noticeable change would be:
However, I have no mean to test the changes I made since I do not have access to a Linux-liked system. I thought this is the end until I thought of setting up a virtual machine on my Windows laptop. It takes me a few more days to set up an Ubuntu system and configure it to work as a developing environment.

As I managed to reproduce the bug on the Ubuntu virtual system, I also managed to fix it.

The issue now is still under review... but I hope it is a success!

Release 0.3b: #translation #maintainer - An amazing story with Gatsby.js 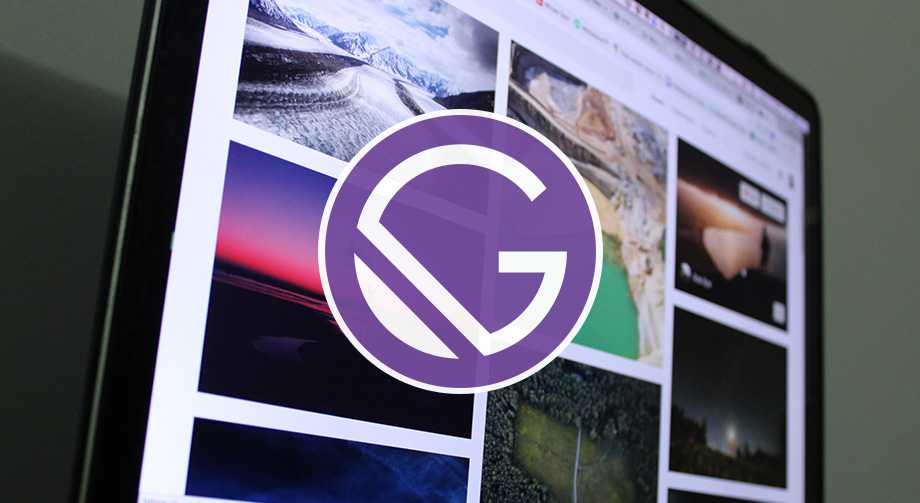 I have been imagining that I am going to have a good blog post for the following satisfactory and unforeseen story. Initial Failure Since last week, I have been very tempted to level-up my game with the contributions I have been making to open source. I planned  to work on a project of Microsoft which turned out to be a spectacular failure for me mainly because  a)  I cannot grasp enough the complexity of the codebase to accomplish a good-enough contribution for my goal and  b)  many smaller issues were CSS modification when I was more interested in making contributions to functionality. However, that fact changed just the next day... How Gatsby and I crossed each other's path The following day, as my friends and I are staying after class, as usual, by chance, we had a conversation about how we are catching up with the heavy load of the semester and our open source contribution goal. A good friend of mine  suddenly reminded me of a conversation we had before (when my interes
Read more

I used to think that my Vietnamese language capability would never serve me in the field of Software Development. To be fair, at least not while I am studying at an English-speaking country and not when most programming documentations are done in English (even programming languages' keywords are in English). I could not be more wrong! Two weeks ago, I blogged about my effort to open a new translation for GatsbyJS documentation to Vietnamese  which I have been really excited about. Since then, the translation repository has been moving forward with some first translations published: [Merged] Contribution Guideline - from me [Merged] Community Code of Conduct - from a contributor [Merged] Tutorial Index - from a contributor who is also a classmate [Reviewing] Tutorial, Set up Development Environment - from me [In Progress] Tutorial, Get to Know Gatsby Building Blocks - from the same classmate above  To accomplish those first translat
Read more

Release 0.3a: #telescope-in-motion - Is it possible to avoid coding style conflict in big project? 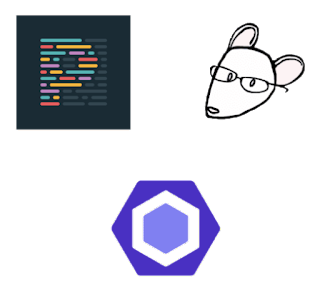 Last week I mentioned project Telescope in my post about my upcoming plan for contribution to open source. It is amazing looking at it right now and see that, at this exact moment, there are 113 PRs solving 138 issues (and still counting) in the repository. I am happy to be 1 of contributors, too. My contribution is about integrating tools to uniform and enforce coding styles and practices to the project. This would solve a few current problems such as: Indentation type and size mismatch - 1 tab vs. 4 spaces and 2 spaces vs 4 spaces Newline character mismatch - Windows CRLF ( \r\n ) vs. Linux LF ( \n ) Naming convention mismatch - Camel case vs. snake case (underscore-separated) Anonymous function form mismatch - function() { } vs. () => { } Inconsistent (or bad) code formatting in general and many more... in the project to which there are a large number of developers contribute. The tools I mentioned are not completely unfamiliar in any way, they are the combination
Read more